Most expensive (and cheapest) holiday destinations in the world: 2020

It’s that time of the year again – we’ve released our annual report into the most expensive vs cheapest destinations for the coming year, taking a look at 100 destinations worldwide to find out which holiday destinations are most affordable and which are exorbitantly pricey.

Whether you’re looking for the cheapest sundowners or most affordable cappuccinos, we’ve uncovered the best options worldwide. To help you make an informed decision when booking your 2020 getaway, we’ve also looked at the averag

e hotel prices per night, taxi fares, and meals for two, along with the cost of unexpected medical costs and average currency exchange rates.

This year, Grand Cayman (a British territory) ranked as the most expensive location in the world, where costs total £459.58 per day. Furthermore, Antalya replaced Manila as the cheapest destination, where a single night will set you back just £63.79.

Take a look at the infographic below to find out where your favourite city ranks.

2020’s most expensive holiday destinations in the world

Excluding flights, Grand Cayman is the most expensive destination, beating New York City which held the title for the past two years. Interestingly, New York City dropped to fourth place this year, with its average price per day dropping from £375.38 to £362.06. Abu Dhabi and Zurich took second and third place respectively.

At the opposite end of the table, Antalya in Turkey is the cheapest destination in the world for 2020, stealing its title from Manila, Philippines. While Manila cost an average of £74.53 last year, Antalya will set you back only an average of £63.79 this year.

Once again, Europe and America make up most of the top 10 priciest destinations in the world, with the likes of New York City, Zurich, and San Francisco retaining positions inside the top 10. Two Middle Eastern Countries have debuted in the top 10 – namely, Abu Dhabi and Dubai. London has also made the top 10 list this year at eighth place (up from thirteenth place last year).

Many of the cheapest locations in the world are outside of Europe, primarily in Africa and Latin America – however, there are some bargain European breaks to be had. Kiev, Ukraine is one of the best places in Europe to grab a cheap break. Antalya, Turkey and Tbilisi, Georgia also feature really strongly as nearby locations for a cheaper holiday.

Most expensive and cheapest hotel rooms around the world in 2020 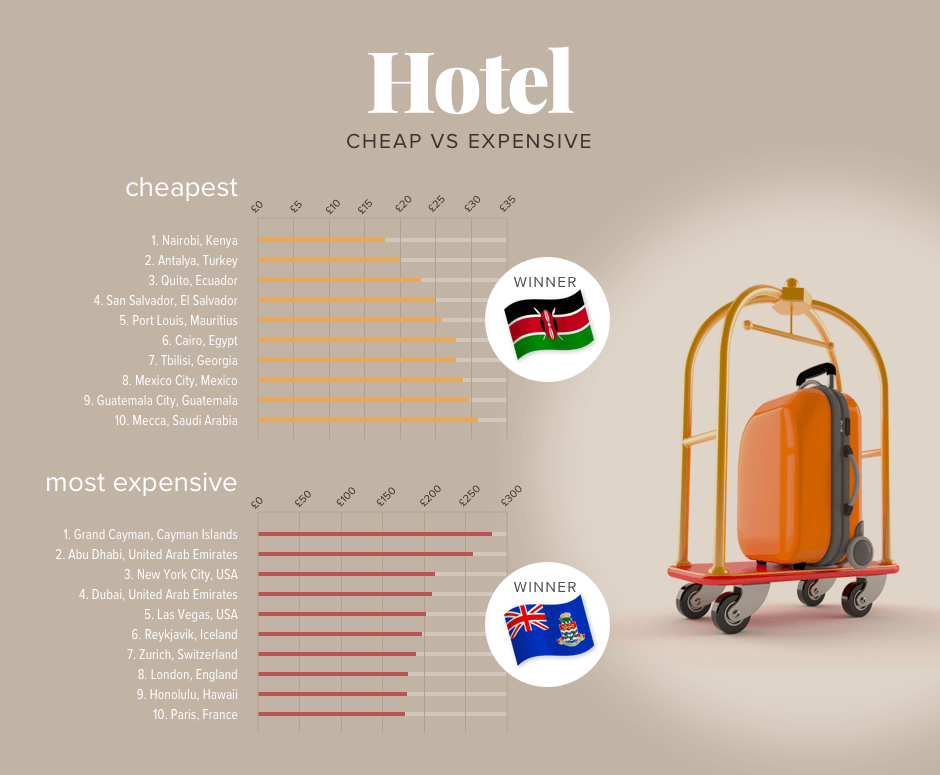 These prices were calculated by looking at several hotels of each star category in each destination and finding the averages amongst those. Antalya and Tbilisi again jump out as great choices for quick, cheap breaks.

The Middle East is not the best location for affordable sundowners. Cocktails, beer, wine, and even coffee in UAE, Qatar, and Bahrain are all amongst the most expensive in the world.

For cheaper drinks, travellers are spoiled for choice with options around the globe. The cheapest beers in the world can be found in Africa – just £0.88 per pint in Kampala, Uganda and £0.95 per pint in Dar es Salaam, Tanzania. Don’t discount African beer, either. These countries offer great local brews as well as a budding craft beer options.

Interestingly, Nice in France featured in the top 5 for the cheapest bottles of wine around the world for 2020, revealing that French wine isn’t necessarily expensive. Buenos Aires in Argentina is home to both the world’s cheapest wines and cocktails, while Ljubljana, Slovenia offers the cheapest coffees.

If you're looking for a bite to eat, Ho Chi Minh City in Vietnam takes the title for the cheapest restaurant meal for two, including appetisers, main courses, wine, and desserts, while Tunis in Tunisia offers the world’s cheapest fast food. At the other end of the scale, Zurich in Switzerland is expensive for both, as are Oslo and Reykjavik.

Cheapest and most expensive medical aid around the world in 2020

While we always hope nothing unfortunate ever happens (especially whilst away on holiday), it's worth considering. We haven't included these costs in the totals for the average day, as doctor’s visits are an exception rather than a rule. Travel insurance can be purchased from a variety of sources to mitigate this risk, and if you're travelling around the EU then apply for a free EHIC, which can help subsidise any medical costs that occur.

Cheapest and most expensive taxi prices around the world in 2020 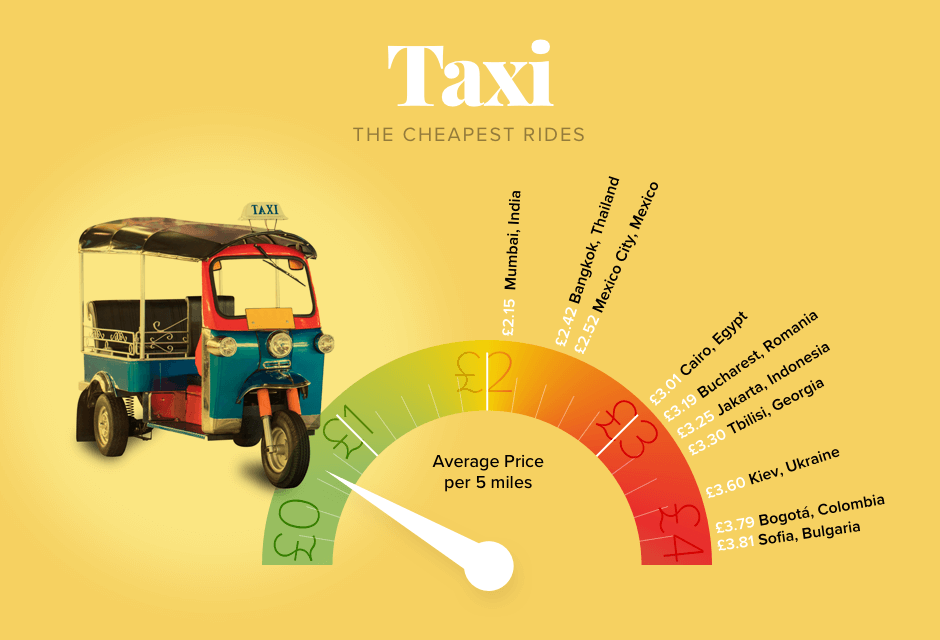 Zurich has the world’s most expensive taxi rides for the fourth year in a row, with other European destinations rounding out the top 10. Mumbai and Bangkok offer the world’s cheapest taxi rides. But you know us, and for the best deals on ground transport around the world, you're in the right place! Search, compare, book and manage with hoppaGo. 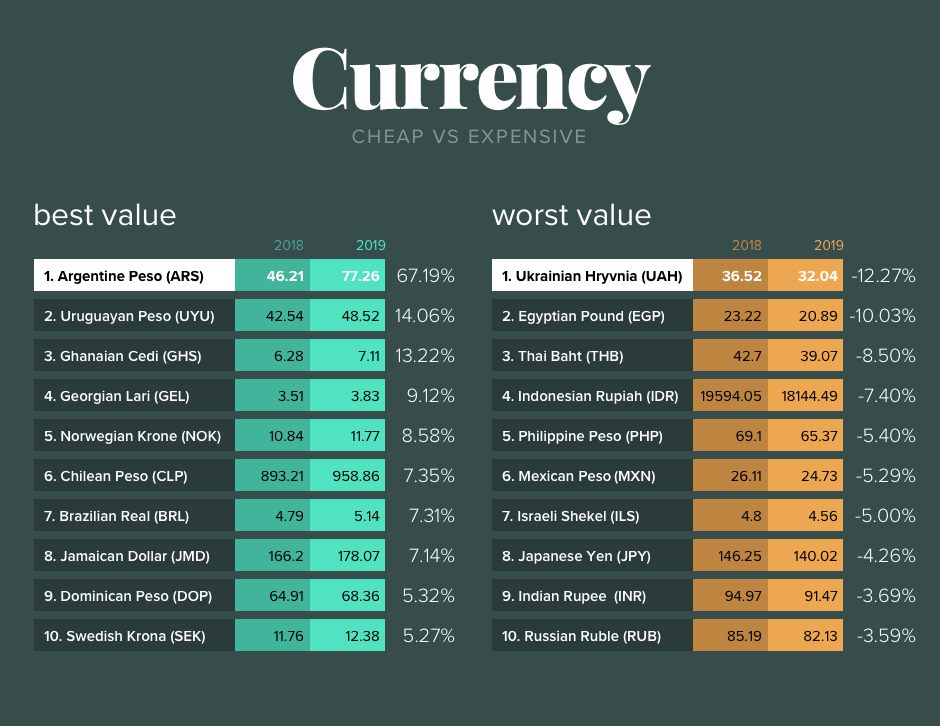 This is a look at how the British pound performed over the last year. You can certainly get much more for your money if travelling to some of the South American countries again this year with the pound gaining value against the Argentinian Peso, the Brazilian Real, and the Chilean Peso. For 'closer-to-home' travel, the value of the pound versus the Georgian Lari. the Norwegian Krone, and Swedish Krona has also improved over the past year helping you stretch your money further in these locations.

Please contact us for more information on our proposition